YHC was originally planning to audit his first visit to Quickhatch and Q the Weekend Crick, but Fruity Pebbles reached out to swap Crick Qs so that he could co-Q with his 2.0 Warrior for Warrior’s 13th birthday. Trying to keep my current three Qs per week pace, I asked the Crick guys if it would be OK for me to Q Quickhatch. As you might guess by the existence of this backblast, they said yes.

Warm Up:
Give the mission statement, check for FNGs, give the disclaimer

COT:
5 PAX
We got back just in time for Weekend Crick to start so we just put up our rucks and doubled down. COT was at the end of Weekend Crick.

Naked Moleskin:
I feel kind of dirty claiming a Q on this one. I think next time I’ll do exercises at each intersection.
I did learn some Quickhatch history from Birkenstock on the ruck. Back when F3 Raleigh was really into organizing custom rucks, QH was created to prepare for these types of events. After a custom ruck or two that were too over the top, the Crick PAX decided to scale back QH and just ruck. QH even went on hiatus until interest renewed due to Snowbird’s March Madness Challenge (post non-traditional/bootcamp AOs).
I really appreciate the Crick boys starting Quickhatch back up for the challenge. It is nice exercise with plenty of 2nd F chatter opportunities.
If you are interested in rucking more with these guys (assuming QH goes back into hiatus at the end of the month), let me know. A group meets Friday mornings at Umstead “off the books”.
Today I learned Quickhatch is another name for Wolverine. Maybe you already knew this. So the featured image is, of course, a wolverine from the 80s classic, Red Dawn.
This was my twenty-third #F3Q21 #2021Challenge Q. Next stop is Rush Hour on 3/16.
-Pigpen

I just realized while working on this backblast that Rush “Hour” is only 45 minutes. I’m sure I’m late to… 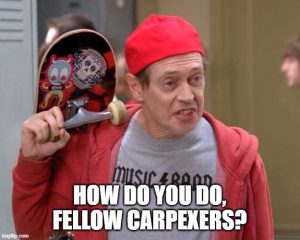 Greetings, Carpex! YHC just completed my 2021 Q Challenge in Raleigh (Q 21 different AOs) and I am spreading my…