Dawgpound had previously expressed his dislike of running on more than one occasion and was looking forward to a morning where no running would be required after all the hard work he and many other SouthWake PAX had put into their training to run the Wrightsville Beach Half and Full marathon as well as the Tobacco Road Half marathon. This was that morning where his revenge on the runs was to take place. Appropriately dressed, Dawgpound showed up in his comfy Wrightsville Beach green St. Patties Day marathon pajama bottoms to help YHC unload the truck full of pain for such occasion.

With a minute until launch a quick briefing as to the workout involving the line of tires, cinder blocks, fire hose, bar bell, water jugs, etc. was given to the 17 #HIM before our warm up began.

With no time to waste we made our way over to the line of Big Boy Toys, dropped down for 5 Merkins and each PAX proceeded to carry, pull, lift, drag, or maneuver anyway he could to make his way across the parking lot with said weight. Any stop in the middle for a reprieve required a minimum 5 Merkins  OYO and then return to the task at hand. Reverse directions at opposite end of parking lot but not before stopping and performing 5 more Merkins OYO. Once back to start line drop down for 5 Merkins OYO and then hold plank while waiting on the six. Rinse and repeated this twice before YHC called upon Farva to lead us in a 20 yard Alligator merkin walk. Returned to the toys for a 20 Merkins IC. Rinsed and repeated several times before ending with 5 burpees OYO and then a group effort loading the Pain Truck back up.

YHC shared Prov. 27:17 “As iron sharpens iron so one man sharpens the countenance of another man.” KJV I briefly shared how F3 has shaped my focus from being inward for many years in regard to chasing my own PR’s (personal records) while running and racing to an outward focus on encouraging other men to achieve their own PR’s and individual goals. F3 enlightens the countenance on the face of our brothers when we begin to put him before ourselves. Farva then shared a very moving and personal testimony about the power of God in saving his marriage and redirecting his priorities as well as the vision God has given to him during a humbling time on his knees. He then read from 2nd Peter 1: 5-9. Dauber was called on as the sixth to give a brief testimony about his involvement in F3 and what it means to him.

Breach led us out in prayer. 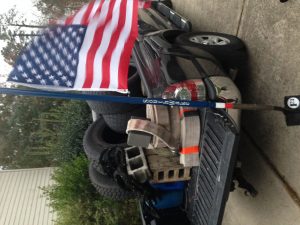 I just realized while working on this backblast that Rush “Hour” is only 45 minutes. I’m sure I’m late to…

YHC was originally planning to audit his first visit to Quickhatch and Q the Weekend Crick, but Fruity Pebbles reached…